The Pioneers in the Americas 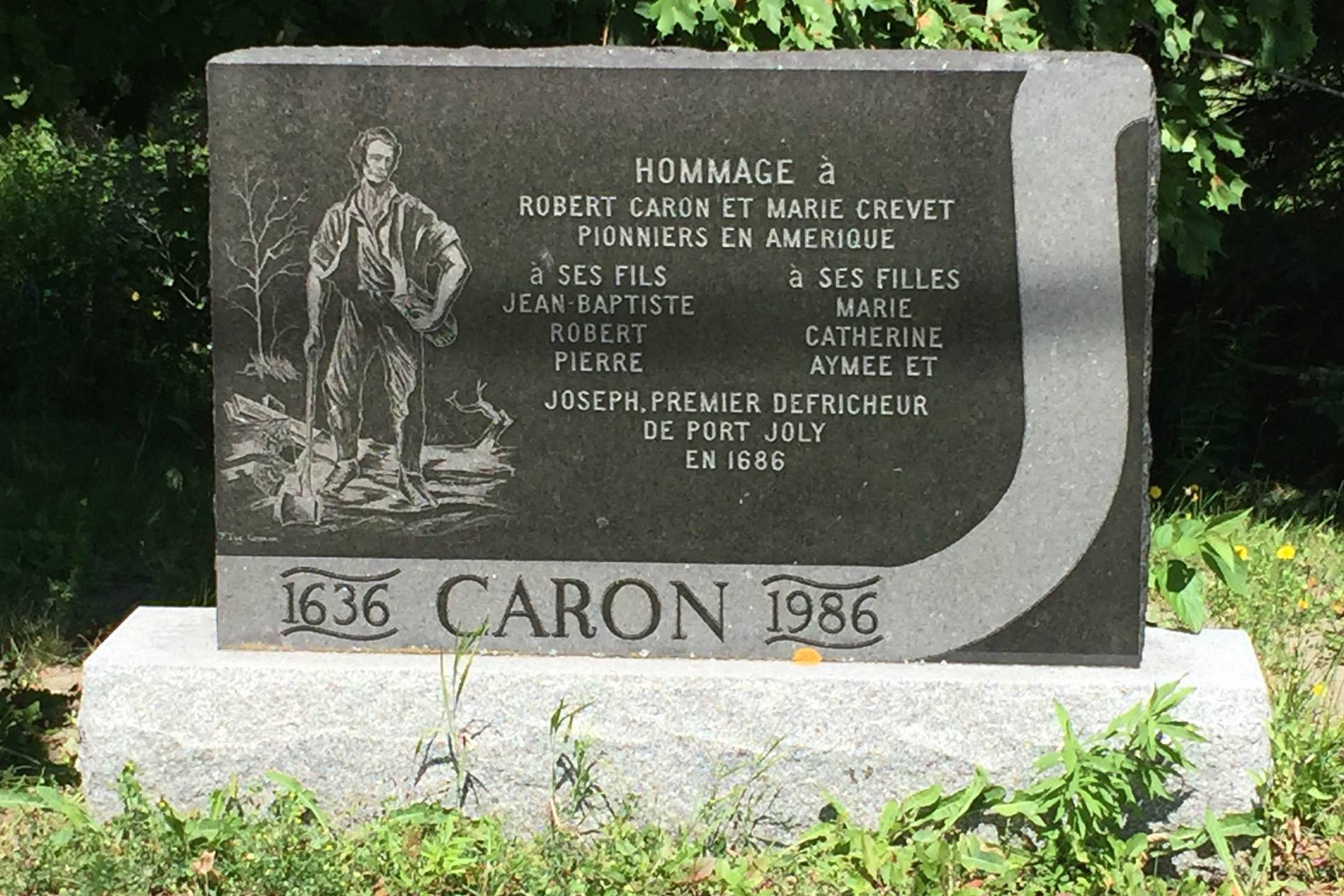 What was the motivation of the ancestors Robert Caron and Marie Crevet to decide to cross the Atlantic and come to settle in New France, this new country was already recognized for its magnificent landscapes, harsh winters and relationships sometimes tense with certain enemy Indian tribes? Let’s go back a few years to understand the context of the establishment of the first settlers in Quebec.

Samuel de Champlain, was a great French navigator, cartographer, soldier, explorer, geographer, commander and author of travel accounts. He founded Quebec City in 1608. As on his previous voyages, and those of former French navigators, he renewed alliances with the Montagnais and the Algonquins, who live north of the St. Lawrence, acquiescing in their persistent demand to help in their wars against their enemies, the Iroquois, also semi-nomads, living southwest of the river. In all, Champlain would have made 12 trips to New France from 1603 to 1635. He died on December 25, 1635, in Quebec during his last trip. Before Robert Caron, Joseph Le Caron was one of the first missionaries to the young colony. Joseph was born in France around 1586, he was a sort of provincial of the Récollets, a branch of the Franciscans who, like the Jesuits, put the influence of their religious faith before their own lives. This Récollet, a contemporary and a companion of Champlain, arrived in 1615, seven years after the founding of Quebec. He went up the St. Lawrence to Ville-Marie (Montreal) where, in the presence of Champlain, some French people who accompanied him and some Indian friends of the French, he celebrated the first mass outdoors in Quebec. He also founded the first Huron mission in New France. Joseph was one of those admirable men to be looked at with the eyes of their time. Historical truth forces us to say that without these religious communities of men and women, New France would have been nothing but a beautiful utopia. A country could never have been born and grown from the banks of the St. Lawrence, missionaries were not lineage founders, by definition. They nevertheless participated in the founding of the country. Everything was going well enough for him and for his mission until July 19, 1629, when an English fleet, under the command of David Kirke, these corsairs in the service of England, seized the Quebec trading post by intercepting supply ships from France, which has the effect of reducing Samuel de Champlain and his men to starvation. After the capitulation of Quebec in 1629 before the Kirke brothers, Joseph Le Caron, Champlain and 60 of the 80 inhabitants of the colony, would be forced to return to France. Joseph died there, victim of the plague epidemic of 1632. This Caron “crazy for God” had always remained deeply attached to New France. From 1629, Champlain was absent from Quebec until the Treaty of Saint-Germain-en-Laye in 1632 by which England returned to New France (Quebec) to France, which it had captured in 1629. On March 23, 1633, Champlain leaves for Quebec after four years of absence. More than 200 people accompanied him on three ships: Saint Pierre, Saint Jean and the Don de Dieu (the motto of Quebec City is “Don de Dieu ferai valoir”) – translated into English would be Gift of God would argue. On August 18, 1634, he sent a report to Richelieu saying that he had rebuilt on the ruins of Quebec, enlarged the fortifications, built another house fifteen places upstream, as well as another in Trois-Rivières. He also began an offensive against the Iroquois with the Indian friends of the French. It was not until the summers of 1634 and 1635, in the last eighteen months of his life, that Champlain saw his dream of colonization come true, with the arrival and establishment of a few dozen families of settlers. His eagerness to want to establish a French colony in North America earned him, the nickname “Father of New France”.

Gérard Lebel relied on writings attributed to the Intendant Talon, according to whom Robert Caron arrived in Quebec with Robert Giffard, on June 4, 1634. If this is the case, he would have embarked in Dieppe, on a ship of the Hundred Associates commanded by Captain Nesle. 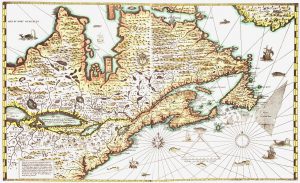 In his “Biographical Dictionary of Quebec Ancestors”,the genealogist Michel Langlois writes: “The period and the context of his arrival in the country, as well as the fact that he married a Norman and settled on the Côte Sainte-Geneviève in 1642, lead us to believe that he himself was of Norman origin. The baptismal certificate of Robert Caron, son of Johan Caron, found in the register of the Saint-Vivien parish of Rouen in 1613, could be his. Michel Langlois sets November 30, 1636, as the date of his arrival in the country.

It’s useless to speculate about the mystery of the ancestor’s origins. What is important is that his marriage to Marie Crevet seemed happy and his establishment in his new home land. Upon his arrival, Robert accomplished many things very quickly, maybe he felt the urgency.

Whether he arrived in New France in 1634, or 1635, or even in 1636, Robert Caron is one of the first French to have established himself in New-France. The least we can say is that Robert didn’t take very long to come and he was one of the first founders of this country.

Settling Down and Starting a Family With Marie Crevet

A few months after his arrival in Québec, Robert Caron establishes himself and marries his wife. At first he settled on the Beaupré coast, east of Montmorency Falls, a place called Longue-Pointe, on land granted to him by Pierre Le Gardeur de Repentigny. On October 25, 1637, he married Marie Crevet in Quebec, daughter of Pierre Crevet and Marie Lemercier, of Bénouville Bayeux, in Normandy in Calvados. We do not know the date of her arrival in the country either. The population of Quebec was probably under three hundred people. The wedding took place in the Notre-Dame-de-la-Recouvrance chapel in Quebec. He is blessed by the Jesuit Charles Lallemant, who served as a parish priest. Jamen Bourguignon, a friend, Noël Langlois, an early settler, and Robert Giffard, surgeon and lord, attended the wedding as witnesses. Seven children were born, from this union. Robert did not stay long on the Beaupré coast. In October 1642, he sold his house and his land from Longue-Pointe to Guillaume Couillard for 150 pounds in silver. He then settles in Sainte-Geneviève, among other ancestors of Norman origin. According to Victor Caron, one of the good genealogists of the Association of Caron Families, this location in Sainte-Geneviève would be on the site of the current Jesuit College, corner René-Lévesque and Joffre. In the spring of 1643, he began to clear his land. He was highly appreciated by the leaders of the country. The Compagnie des Cent-Associés gave him the official title of its concession of 40 acres of land three years later, between the properties of Louis Sédillot and Claude Larchevêque. Governor Louis D’Ailleboust soon gave him twenty more acres. On December 6, 1652, Governor Jean de Lauzon recognized these two titles to apparently encouraged him to stay there. But the ancestor Caron wants to move. After 12 years spent on his beautiful land in Sainte-Geneviève, in 1654, he sold it to Charles D’Ailleboust, nephew of the governor, for the considerable sum of 1,700 pounds. In fact, he sells all of his Quebec properties for a reason that only he knows.

A few months earlier, he had bought from Julien Fortin dit Bellefontaine, for 500 pounds, five acres of land on the Beaupré coast, at Sainte-Anne-du-Petit-Cap, less than two kilometres from the current Sainte-Anne basilica.

He wouldn’t have time to enjoy his new home on the Côte de Beaupré. On July 8, 1656, he died suddenly at the Quebec Hospital. Accident or illness? We’ll never know. He was 44 or 45 years old, according to Gérard Lebel.

After the Death of Robert Caron

Robert Caron’s widow waited 10 years before remarrying. Marie Crevet married Noël Langlois, widower of Françoise Grenier, the same settler who had witnessed her first marriage. To avoid quarrels between the Langlois heirs, they married while keeping their belongings separate. A marriage based on love obviously. In 1684, Noël Langlois passed away at the age of 80. He was the oldest resident in the country. Marie would live until 1695. Her act of burial gives her 92 years. Lebel said she was 86 years old, which was exceptional longevity at the time. Subsequently, a dozen Caron ancestors were born in New France. The ancestor Robert is the most interesting from a genealogical point of view because he is the first to arrive and because his descendants are the most numerous. Let us pay tribute to our founding ancestors who showed so much courage and determination to succeed in building their homes using the resources available on site, to clear and cultivate the land to feed their families. They knew how to transmit to their descendants the values ​​of builders: valour, generosity, tenacity, courage, respect and resourcefulness. For those interested in learning more about the Caron Families of Americas Association, we invite you to obtain the book : « Les Familles Caron d’Amérique, 1984 à 2004 » des Éditions : La Plume d’Oie, 2004, Editor in chief : Marielle Caron. This book was the reference used to write this text along with information from the websites (in french) : claude.Dupras.com, https://gw.geneanet.org.