The History of our Association

In 1982, a group of 6 Carons decided to meet in Saint-Jean-Port-Joli, a region that was heavily populated by Caron descendants for more than three centuries. They were four cousins in addition to the project instigator. They were all imbued with the noble sense of the family, in fact 5 of them were from large families that had up to 17 children. They met in Cécile Caron’s residence since she had the idea to establish a Caron Association out of a sense of belonging and service. They started writing to their Caron cousins to seek support and volunteers. Recruitment was so successful that by 1984, over 300 people were in favour of creating an association. The organization was registered with the government and the first board of directors meeting could be held in 1984. Subsequently, the association experienced rapid growth. 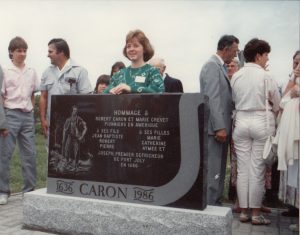 Inauguration of the monument in 1986. Photo by Henri Caron from Trois-Rivières.

“All families feel the need to reconnect with their past, take a look at where they came from, rejoice in the work they have done, and look to the future.”

At that time, before the arrival of the internet and social media in homes across Quebec, people liked to go out and meet relatives and friends with shared interests and values. The association decided to organize its first two-day gathering on July 5th and 6th, 1986 with the support of a dynamic group of volunteers. On the second day, 2240 people attended lunch during this reunion. In the afternoon, a glance at the crowd gathered in the Saint-Jean-Port-Joli arena allowed us to estimate that approximately 2800 people attended. The majority of the participants were from Quebec, seven other provinces and 24 different states of our American neighbours. This huge success in raising awareness of the association had paid off for the thousands of hours of work given by many volunteers. In subsequent years, annual gatherings took place in different regions of Quebec with more modest participation rates with Carons that were happy to reunite with family to have a good time together.

Another popular activity since 1988, was the annual gathering at the sugar bush*. (*This is a small maple sugar festival held in the spring. This tradition is typical in eastern Canada.) What a wonderful opportunity to eat, sing and enjoy the sweet maple treats!

Since the beginning of our group’s existence, many of the volunteers involved are passionate about genealogy. In fact, our archives show that the first of their meetings were in 1984. Initially their objective was to exchange information. Shortly thereafter, the need to publish the results in a book ‘’Généalogie des Caron d’Amérique’’ was felt. The first book was published in 1986, a second one in 1989, the third in 1996, the fourth in 2010 and finally the fifth edition was published in 2014. The website database became an excellent source of information thereafter. (Your Bloodline)

With members spread out across a territory as large as North America, the association quickly decided to implement an official communication tool. This is when the regular publication of the To Hold and To Serve Newsletter. The first issue was published in December 1986. Its mission is to be the vehicle for information exchange, suggestions and information in order to enhance the vitality of our association. The association had already created the first version of a website in 1995. This present website is a new modernized version that was revamped in 2020. We are also on social media with a Facebook group :

For those that are interested in learning more about the many other activities of the Caron Families Association of the Americas, we invite you to purchase the book, ‘’ Les Familles Caron d’Amérique, 1984 à 2004 » from the publisher : La Plume d’Oie, 2004, Editor-in-Chief : Marielle Caron. This book is the main source of reference used to write this text.